[King Josiah] demolished the houses of the qadeshim that were in the house of the Lord, where the women wove houses for Asherah. --II Kings, 23:7

Surely I found a woman ruling over them, and she has been given abundance and she has a mighty throne. I found her and her people adoring the sun instead of Allah... -- Quran, Sura 27:22

Female iconography and ceramics at Tell es-Sawwan, Samarra, Jarmo, Tepe Gawra, and other neolithic sites going back to the 8th millennium BCE. Women in Sumeria, Babylonia, and Assyria: farmers, priestesses, and barmaids into heads of state. Sexual politics in cuneiform texts. The tightening of patriarchal laws under successive empires. The now-looted and endangered treasures of one of Earth's most ancient civilizations. 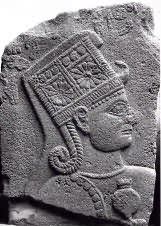 ASIA MINOR and the CAUCASUS

The Lycians show more honor to the women than to the men; they call themselves after the mother and bequeath her property to their daughters, not their sons. --Nicolaus Damascenus

Great is Artemis of the Ephesians! --Pagan demonstrators in the Christian Bible 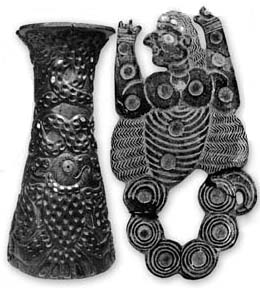 [Qurrat al-'Ayn] rose from her seat and, undeterred by the tumult that she had raised in the hearts of her companions... she delivered her appeal with matchless eloquence and profound fervor. ... Immediately after, she declared, 'I am the Word which the Qa'im is to utter, the Word which shall put to flight the chiefs and nobles of the earth.' -- Sheikh Abu-Turab

A king's son who was the strongest in his kingdom offered 1000 horses in challenge, and a great multitude came to see the fight. At last the king's daughter vanquished him and threw him on the pavement most violently.
--- Marco Polo, Tatar Relation

Women were not formerly immured in houses and dependent on husbands and relatives. They used to go about freely, enjoying themselves as they pleased best. --the Mahabharata

Indus civilization: not only the better-known sites of Mohenjo-Daro and Harappa, but older sites of Mergarh, Kulli. Women in Vedic tradition and sexual politics among gods and goddesses. The indigenous Adivasi: "Dwellers from the beginning." Female images in the art of Sanchi, Ellura, and Ajanta. The Sapta Matrikas. Patriarchy and caste in the Laws of Manu. Mother-right and female-positive traditions among the Dalit (oppressed classes/ethnicities).

THE NAMES OF DEVI

O Devi! When Brahma was not, Vishnu was not, Maheshvara was not, nor when yet existing Indra, Varuna, Kuvera, Yama and Agni, Thou alone existed then. My salutations to thee. --Vyasa in the Devi Bhagavatam Purana

Temple art of Nepal. Taleju and the Kumaris. Village life and weaving. Bönpo and Buddhism in Tibet: female imagery in thangkas and sculpture. Jetsunmas (women religious authorities) and bhikshunis (nuns). Women in the countryside. Tibetan sovereignty movement. Women in Mongolia from the middle ages to the present.

In the old days the wisdom of women was held to be the true wisdom of the people, and it was seldom the men failed to be guided by it.
--Alexandra Ovchinninkova, Yakut leader

Paleolithic goddesses of Siberia. Rock writings of the Lena River. Ancient ceramics, petroglyphs, and fabric arts of the Amur River. Women shamans, housemakers and hunters. Karyndash clans in the Altai: "of one womb." Yakut ceremonial and art. Peoples of the Urals, the Arctic and Kamchatka. The impact of 500 years of Russian conquest, and the revitalization of indigenous culture.

If a man from any other place weds a woman from this place, he straightway droops and dies. -- Japanese proverb on Onna-Taki ("Woman Hill"), named for its tradition of female-headed clans.

During the age of Shen Neng, people rested at ease and acted with vigor./ They cared for their mothers, not for their fathers....
They did not think of harming one another. ---Zhuang Ze

A young girl's heart is sad and troubled, fearing that she may have to go home with her lord. -- the Book of Odes

Neolithic ceramics and bronzes of old China. Ritual leadership by the Wu, female shamans. Taoist cosmology: Heaven and Yellow Land Earth Queen. Matrilineal clans of Hsia give way to a patriarchal system under the Shang. The powerful queen Fu Hao. Women under feudalism and Confucian codes, in the fields and the imperial court: farmers, warriors, and peasant rebels.

"Women had the right to stop war by the custom of that time. The two sides had to stop fighting if a woman of either side waves her skirt and calls for an armistice." --old Lisu man, Yunnan

The bronzes of ancient Shih-Zhai-Shan. Quite a number of the highland cultures in southwest China are matrilineal, and strong traditions of gender egalitarianism are seen in many others. The Mosuo, known to the Chinese as the Kingdom of Daughters, and their female clan heads (dabu). Lahu, Jingpaw, Pumi, Lisu, Jinuo, Norsu, Wa, Drung, and Dulong. Female drummers, womanhood inititations, female courtship, and stigma-free youthful affairs in the "flower houses." Female drummers and traditions of powerful women shamans, inventors, and saviors. Also, the patrilineal Yi, Hmong, and Yao. The indigenous mother-right cultures of pre-colonial Taiwan.

In this country it is the women who engage in commerce... Each day a market is held from six to noon.
--Chinese traveller in Cambodia

My wish is to ride the tempest, tame the waves, kill the sharks. I want to drive the enemy away to save our people. I will not resign myself to the usual lot of women who bow their heads and become concubines. --Trieu Thi Trinh, leader of a Vietnamese rebellion against Chinese rule in 248 CE

Khmer women judges, traders, musicians. Iconography of Anghor Wat and other temple complexes. Mother-right longhouses in a Vietnam that Chinese writers called the "Country of Women." Women in Burma, Thailand, Laos and Yunnan, including many indigenous mother-right cultures with high female status.

Beautiful goddess stand up, stand up. The singers have come and are singing the sanghyang.
Come goddess, goddess, we ask of the nymphs to come to us for a while and go around, go around. -- Balinese chant

The Black cultures of ancient Indonesia. Megalithic buffalo women of Sumatra. Mother-clans of the Menangkabau. Fine weaving, batik, ikat and other textile arts. Temples, dancers and priestesses and dancers of Java and Bali. The eastern islands. Sovereignty movements. The growth of Islam in Java and Sumatra. Globalization and the impact of logging, oil, and other extraction industries.